A 2014-2015 New York State Thruway Authority deck rehabilitation project on I-87 in Rockland County, NY utilized ground penetrating radar (GPR) to assess the condition of two asphalt overlaid concrete bridge decks carrying mainline traffic.  The GPR results were calibrated using cores at 24 select locations, and then combined with results from visual inspection and targeted underside sounding to produce the revised partial and full-depth repair plans. The correlation between the cores and the finalized GPR deterioration map was found to be 83%.

The use of GPR provided significant time and cost savings to the original design methodology, which would have required approximately 30 nights of sounding to fully cover the deck area due to the contract-specified nighttime lane closure constraints and time associated with managing the removal and replacement of the asphalt overlay. The relatively efficient GPR survey saved over $500k in traffic control, labor, and material cost; which was split between the owner and contractor as part of a “value engineering” initiative. 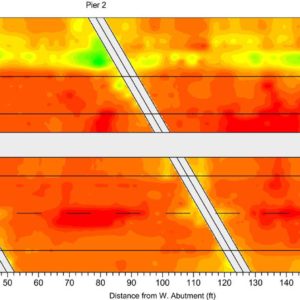 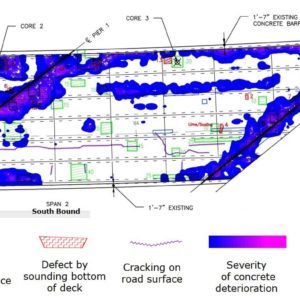 Infrasense used GPR to map of the relative density of new HMA pavements. This relatively new application is being utilized as a quality assurance measure to compliment recently developed quality control systems, such as Intelligent Compaction